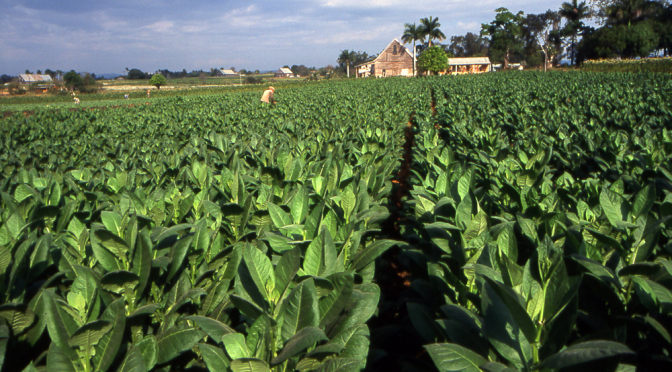 How Tobacco’s been re-thought, re-engineered and re-invented as a platform for sustainable, low-carbon fuels, and green chemicals.

As a key ingredient in cigarettes, the plant contributes to gum disease, emphysema and cancer. This has led to a decline in cigarette sales and tobacco production in the United States over the past 25 years. But one research team thinks tobacco could provide a societal benefit by becoming a new source for biofuel.

US Tobacco #Tyton teams up with #Deinove to make biofuel with Deinococcus (repurposing crops?) http://t.co/hOdAKKFdFv pic.twitter.com/SWqBei5Ejk

Producing gasoline, diesel and jetfuel from tobacco is the focus of an innovative research project that is a collaborative effort of scientists from the Lawrence Berkeley National Lab, the departments of Plant & Microbial Biology and Chemistry at Cal and the University of Kentucky.

A U.S. Department of Energy-backed project called Folium, is using DNA from algae and cyanobacteria to convince tobacco plants to produce and store hydrocarbons in their leaves, which are then processed to make biofuel.

“When you smoke cigarettes you are smoking tar and nicotine, and the tar is bad for health,” he said. “Tobacco is unusually high in tar content and it’s the type of chemical that can be converted into fuels — they are precursors to oil. If these plants were buried for millions of years they would be a very nice oil reserve.”

The lab has partnered with the University of California-Berkeley and the University of Kentucky to engineer tobacco so that its leaves produce oil that can more easily be converted into a fuel source for everything from cars to yachts.

According to biofuelsdigest, hydrocarbons in the engineered tobacco are a form of bio-crude oil, an antecedent to fuel. This bio-crude can be stored in the leaves and directly removed and processed to create biofuel, which requires fewer steps than making ethanol, the researchers say.

Because less processing is required, at a commercial scale biofuel from tobacco could be price competitive with gasoline at three to six dollars a gallon, said Peggy Lemaux, a University of California-Berkeley biologist working on the Folium team.

According to biofuelsdigest,  in France and America, Deinove and Tyton BioEnergy Systems have entered into a technological and commercial partnership. The main goal of the partnership is to combine Tyton’s energy tobacco feedstock, process and production infrastructure with Deinove’s Deino-based fermentation solutions in order to produce green chemical compounds of high commercial value.  Tyton’s energy tobacco technology combines advancements in plant sciences, agronomics, and processing to produce cost-competitive sugars, oils, proteins and other green chemicals at high profits.

Tobacco is getting back into planes, but not how you think #Aviation #Flight #Biofuel https://t.co/f0wEk5qj7C pic.twitter.com/Z6iyZBy0RB

The most important development in tobacco applications around the world right now is Project Solaris in South Africa, which earned the Roundtable on Sustainable Biomaterials (RSB) certification for the production of the energy rich tobacco crop “Solaris” in the Limpopo region of South Africa.

Wired is reporting that Boeing has linked up with South African Airways to do just that, using a variety of genetically-manipulated tobacco called Solaris. The strain was developed by an Italian company called Sunchem that specializes in developing DNA-swapped plants. The interesting thing is that Solaris contains almost no nicotine—it’s useless for the cigarette industry—and is chock full of oil-rich seeds. For aviation use, Solaris seeds will be pressed and converted into jet fuel (essentially kerosene)—but the seed oil can easily be turned into biodiesel using a slightly different process.

One thought on “#startup #innovation: How #Tobacco could be used as a #sustainable #biofuel?”