In the past month alone, two major events unfolded in the Algerian oil and gas sector that will in many ways shape the industry risk outlook for 2016.

First, a source at Algeria’s state-owned hydrocarbon behemoth — Sonatrach — announced that it would begin accepting direct negotiations with foreign firms interested in purchasing stakes in 20 Algerian oil and gas fields. Emerging from the aftermath of continuously depressed oil prices, the shift represents an effort to increase revenues by way of new investors in a country where regulations have often stifled prospects.

Second, on March 18th, Al Qaeda in the Islamic Maghreb (AQIM) launched a series of homemade mortars at Algeria’s Krechba gas plant. Though the attacks did not leave any casualties or damage, they underscore the long-standing vulnerability of the industry to Islamist terrorism.

At their core, these two events embody what can be expected from the Algerian energy industry in 2016: a vacillation between newfound investment opportunity and heightened insecurity.

Understanding each development and their impact on Algeria’s energy industry is crucial to investors and hydrocarbon executives navigating the sector in 2016.

As a country in which oil and gas accounts for roughly 35% of GDP and over 60% of total exports, and with natural gas reserves among the largest in the world, the potential of Algerian energy for investors is clear and substantial. These prospects have traditionally been hindered by a variety of conditions inherent to Algeria — the foremost of these being unfavorable regulatory conditions.

However, Sonatrach’s recent announcement is an attempt to remedy these shortcomings. Prior to the announcement, all foreign stakes in Algerian oil and gas fields were to first be negotiated through the country’s state oil licensing body, ALNAFT, which was then required to partner with Sonatrach to secure the outsider involvement. Instead of continuing this burdensome contractual regime, foreign firms are now able to negotiate directly with Sonatrach to purchase stakes in 20 oil and gas fields.

The shift in strategy is a welcome sign for hydrocarbon investors. Oil executives have long criticized the heavy bureaucracy that surrounds Algeria’s massive energy industry, and two recent energy bidding tenders failed to attract interest due to the slow decision-making at ALNAFT. With direct bilateral negotiations between foreign investors and Sonatrach now in place, buying stakes in Algerian oil and gas will now be cheaper and more efficient.

While these streamlining procedures open up new investment opportunities and increase the attractiveness of Algeria’s oil and gas prospects on the whole, notable barriers still remain within national hydrocarbon laws. Sonatrach is legally required to possess a 51% majority stake in any hydrocarbon project in the country — a discouraging policy that removes influence from foreign shareholders by placing the management of their capital in the hands of its Algerian partner.

Nonetheless, it is important to recognize that these regulations are more malleable than in previous years. With oil and gas prices projected to remain low for at least the short-term, there is reason to believe that further investment-encouraging reform is on the horizon.

In spite of progress in streamlining the investment contract process, the attack on an Algerian gas facility represents a deeper security risk that threatens to negate emerging investment opportunities in the hydrocarbon industry.

The losses were also significant from an investment perspective, as the facility only returned to full-production at the start of 2016. Al Qaeda’s more recent attempt in Krechba indicates that the industry still operates in a similar tide of insecurity.

This is derived from both external and internal catalysts. In terms of external forces, ISIS has been widely viewed as undergoing a resurgence in 2016 in neighboring Libya, where Islamic State militants have recently begun to specifically target hydrocarbon assets. Terrorist attacks along the southern border with Mali — through which those behind the In Amenas crisis entered — have also increased in frequency.

Considering their weight in the national economy, Algerian oil and gas assets are among the most alluring targets for any violent organization seeking to devastate the country and its government. If ISIS continues to thrive in Libya during the coming months, it is foreseeable that the group might seek to carry out similar attacks in next-door Algeria through a smaller, more covert operation.

Other more localized terrorist groups — such as the AQIM militants behind this month’s attack — may also target hydrocarbon facilities sooner rather than later as they recognize the resurging influence of the Islamic State and organizations operating in Mali.

Furthermore, bolstered terrorist activity occurring in Libya and Mali will displace individuals in greater frequency and, in turn, place strain on Algerian border security. Border security is a major factor in the security of Algerian oil and gas assets, and any strain will consequently place the industry at greater risk. In the past four months alone, Algeria has foiled two separate terrorist attacks on multiple oil installations plotted by militants seeking to enter the country from Libya.

These trends are self-reinforcing through their agitation of existing internal pressures within Algeria. Social unrest is gradually building as a result of the declining oil prices at the core of the country’s economy. With active terrorist groups already present within, and with violent extremism proliferating around Algerian borders, unrest may be a catalyst for Algerian citizens to radicalize —  further jeopardizing the security of the hydrocarbon industry. 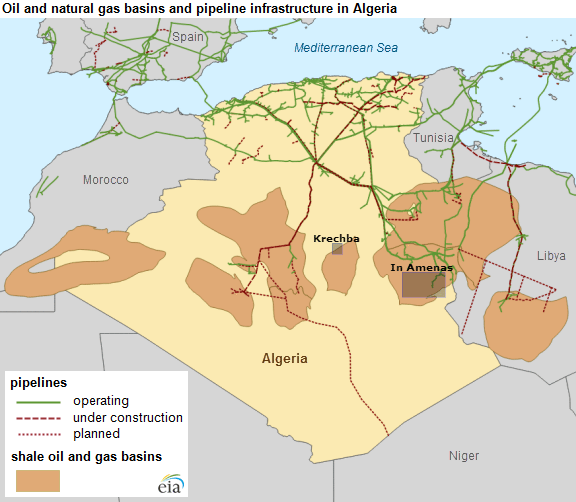 To its credit, the Algerian government has taken measures to safeguard against these risks. Since the In Amenas attack, Algeria has increased the security of its oil and gas facilities by militarizing the protective service at installations, which were previously guarded by private forces. It has also increasingly militarized its borders while building anti-terrorism operations.

The ability of these efforts to neutralize Algeria’s growing security risks are questionable, particularly in light of the recent attack in Krechba. Streamlined negotiation processes present newfound opportunity for hydrocarbon investment in Algeria, but the current security environment has made investment in the sector riskier than in previous years — and even still, arduous legal barriers remain.

Healthy recipes for the apprehensive chef

the meaning of life