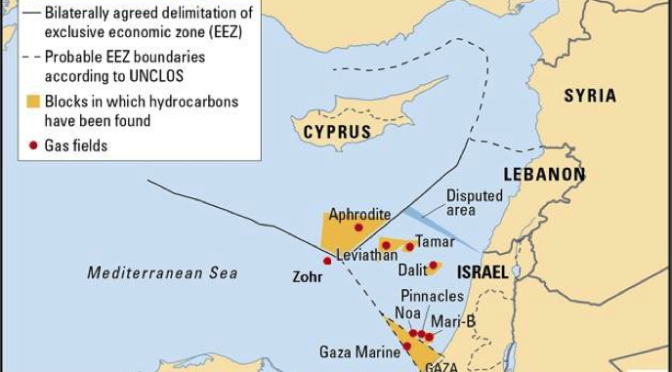 Reuters and local media report that Israel, Greece and Cyprus will explore the possibility of building a natural gas pipeline to Europe, tapping huge gas reserves discovered in the eastern Mediterranean in recent years, as this has been discussed last week with a summit of the Israeli, Greek and Cypriot leaders in Nicosia (Cyprus).

Israeli Energy Minister Yuval Steinitz has said experts estimate there are 10,000 to 15,000 billion cubic meters (bcm) of gas in the east Mediterranean basin, which includes Israel, Egypt and Cyprus — enough to supply domestic needs as well as Europe.

The 1,500 km EuroAsia Interconnector would send up to 2,000 megawatts (MW) of power generated from the gas fields to Europe via Israel, Cyprus and Greece.

Project managers say a 329 km first phase will link Cyprus and Israel.The Leviathan and Aphrodite fields are unlikely to start exporting before 2019 or 2020. Nevertheless, the ambition is to transport gas by pipeline, possibly via Turkey, or in liquefied form by ship to Europe, plugging the East Mediterranean into Europe’s grid and providing an alternative to Russia - which has far worse relations with the EU due to the Ukraine crisis.

Regarding  the power cable which will connect Greece -Israel-Cyprus the project has significant challenges due to size of cable is planned for about 2,000 megawatts, the total length of over 1500 km(Cyprus, Crete, mainland Greece, Italy), the deep traveled and even in areas of the seabed with high seismicity and will be studied by PPC Quantum Ενεργειακή and Depa (an Eastern Mediterranean (EastMed) pipeline project) if some european funds will be available for this project.

With global energy prices expected to remain low for some time, analysts question whether East Mediterranean gas will be the bonanza investors hope, but that didn’t prevent the leaders singing the praises of their joint declaration.

The European Union includes the plans among its “projects of common interest”, which are designed to bolster energy security and improve European market integration.

However, not all experts are convinced a subsea electricity cable to Europe is a genuine possibility. As expected, talk of a pipeline received quick criticism from detractors who have expressed doubt about the financial feasibility of linking the region’s gas reserves to Europe.

“It’s not feasible for commercial and political reasons,” said Michael Leigh, now a senior fellow at the German Marshall Fund of the United States, told Reuters. “Its pie in the sky.”

Last month also, an Israeli exploration group announced it had discovered signs of another large natural gas field off Israel’s coast, building on the Tamar and Leviathan discoveries in 2009 and 2010.

A group lead by Isramco Negev and Modiin Energy said there could be an estimated 8.9 trillion cubic feet (tcf) of natural gas at the Daniel East and West fields.

While some of the offshore gas will be for domestic use, Israel’s difficulty is to find a way to export what it doesn’t need, either via pipelines or LNG facilities, which could require deals with Egypt, Turkey and Cyprus.

Over the last several years, the three countries have made the most progress in developing the Eastern Mediterranean’s new-found energy potential, specifically offshore natural gas reserves found in waters bordering each other. While regional actors like Egypt, Lebanon and Turkey have also taken steps towards developing their own offshore potential, Cyprus, Isreal and Greece have made the most progress towards these goals.

For the Israeli Haaretz, The Turkish shadow hovered over all of last week’s meetings. The reports of Israel’s talks with Turkey to achieve a reconciliation agreement, with the United States’ encouragement, pushed the Greeks and Cypriots to expand their cooperation with Israel. Although Greece claims its relations with Turkey are normal and despite the talks between the Turkish and Greek leaders in Cyprus in a bid to solve the 40-year crisis, Athens and Nicosia still view Turkey as a potential enemy.

Nonetheless, the outcome of all these even the cooperation between Israel, Greece and Cyprus (and Egypt) will depend on a lot of different factors, United States press openly for a joint gas route from Israel to Turkey, Germany’s interests in the region (in a Germany-hold Europe) and a lot of other geopolitical factors. We shouldn’t forget Palestine and the fact that these dials might not give anything to Palestinians.

Greece and Cyprus changed their position regarding Palestine?

On 12 January, Averof Neophytou, the head of Cyprus’ ruling party, the DICY, and the chairman of the Cypriot House of Representatives, visited Israel.

He was quoted as saying: “Cyprus no longer sees Israel as an aggressive country imposing its will by force on the Palestinians, but rather as a small nation fighting for survival in the face of much greater odds.”

He told the Israeli newspaper, The Jerusalem Post, that, over the last decade, his country which had once, alongside Greece, been among the most critical of Israel in Europe, now had a “clearer picture.”

According to Eu Observer and Nabeel Shaath Fatah party’s foreign relations commissioner , what’s even more worrying is the apparently total change in the position of Greece and Cyprus in terms of voting and lobbying in the EU Council.

On the 17 January, the Greek foreign minister almost succeeded in torpedoing the conclusions of the latest meeting of EU foreign ministers, by insisting on an Israeli version of several key paragraphs.

Mr Neophytou, is basically disregarding every UN resolution against Israel, when he should be condemning their Apartheid, Ethnic Cleansing (including house demolitions), Settler Terrorism, Siege and regular NATO sponsored massacres of civilians in Gaza (including targeted destruction of civilian infrastructure, like farm lands, water supply, sewage treatment, power supply) and summary execution of Palestinian civilians who are NOT armed or dangerous, and even murdering unarmed non-violent international peace campaigners and journalists who DARE to challenge their supremacy and Occupation.

Meanwhile, statements attributed to Greek leaders, announcing their refusal to implement the EU directive on labeling of settlement products, were shocking. They were later corrected.

Greek statements supporting Israel’s claim that the whole of Jerusalem is the historical capital of the state of Israel and the Jewish people, completely ignoring Palestinian rights in Jerusalem, were even more shocking.

They remain uncorrected.The Palestinian people expect a correction and an explanation. According to the Palestinian diplomat Palestine doesn’t want  to see a shift away from the strategic relationships that link these two neighboring countries to the Arab and Muslim world.

Noble Energy and Delek, the partners in the Leviathan natural gas field off Israel’s Mediterranean coast signed a deal to sell about $1.3 billion worth of gas over 18 years to Edeltech Group and its Turkish partner for power plants they plan to build in Israel.

The Leviathan partners said on Sunday they committed to supplying a total of 6 billion cubic meters of gas. Edeltech and Zorlu Enerji will be able to adjust the quantity they buy until the date they begin to receive gas in accordance with the size of the plants they build.

Bringing you the latest in ideas, technologies and methods