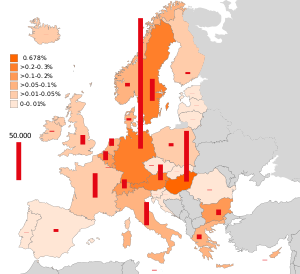 This year as it has been reported that there was a 60 % increase of additional migrant arrivals in Europe. They are already more than 351 000 people who have taken the risk of crossing the Mediterranean Sea this year, for only 219 000 in 2014, according to the International Organization for Migration (OMI). Many drowned in the sea, as small Aylan, a Syrian child whose photo on a Turkish beach has shocked so much the planet this week, or during the appalling conditions of clandestine transport such as the example of 71 people found suffocated into a truck originated from Hungary. END_OF_DOCUMENT_TOKEN_TO_BE_REPLACED Eyes on Europe and The Middle East:

How many people have fled their homes?

About 3.9 million have fled as refugees to neighboring countries and more than 7.6 million people are internally displaced (IDPs) within Syria.

Does the number of refugees show any sign of slowing?

From January 2 to March 10, about 200,000 more people fled Syria for neighboring countries. Their main destinations are Jordan, Turkey, Lebanon, Egypt, and Iraq, though conflict in Iraq now discourages that option.

What are the refugees’ greatest needs?
Refugees need food, clothing, stoves and fuel for heat and cooking, and basic household and hygiene items. They need reliable supplies of clean water, and sanitation facilities.

Children need a safe, protective environment and a chance to play and go to school.

Adults need employment options to provide for their families while displaced.

The UN Office for the Coordination of Humanitarian Assistance says 12.2 million people inside Syria need some form of help, including millions of children who cannot go to school.

Where are the refugees living?

More than 1.1 million refugees are in Lebanon. Many have taken up residence there in communities’ abandoned buildings, sheds, spare rooms, garages, and in tent settlements on vacant land.

Conditions are often crowded and unsanitary. Even so, families struggle to pay rent for these spaces.

Turkey hosts more than 1.6 million Syrian refugees. Iraq, facing its own armed conflict, is hosting about 244,000 Syrians. Nearly 620,000 refugees have settled in Jordan, mostly with host families or in rented accommodations.

About 84,000 live in Za’atari , a camp near the northern border with Syria, and about 15,000 live in Azraq , a camp that opened last April to ease the pressure at Za’atari.

What risks do children face?

Children are especially susceptible to malnutrition and diseases related to poor sanitation. Many suffer from diarrheal diseases and dehydration.

Because of the breakdown of the Syrian health system and lack of adequate immunization, there have been outbreaks of measles and even polio in Syria and among refugee children.

Children are more vulnerable to sexual abuse and exploitation in unfamiliar and overcrowded conditions.

Without adequate income to support their families and fearful of their daughters being molested, parents—especially single mothers—may opt to arrange marriage for girls as young as 13.

What is the impact on refugee children’s education?
After four years of brutal conflict, 2.8 million children are out of school, the UN Children’s Fund (UNICEF) reports.

For children inside Syria, the reasons are many: insecurity, teachers absent or deceased, and schools destroyed or occupied by warring groups or displaced families.

For refugee families that don’t live in camps, paying rent and other expenses can make it difficult for parents to afford books, uniforms, and tuition fees for their children.

In Lebanon, the government has opened public schools to Syrian children, but language barriers, overcrowding, and the cost of transportation keep many refugee children out of school. 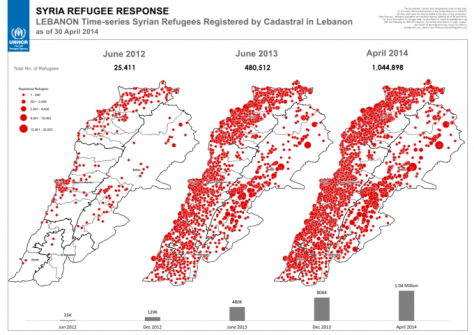 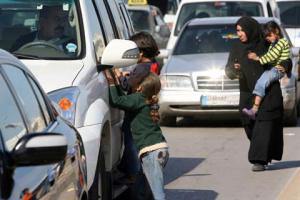 They would be there, rain or shine, whenever my car stopped at the road junction. Hovering beside the driver’s window, their hands would be outstretched and their eyes pleading. As young as around 8 years old, they were dressed in tattered clothes, their hair unkempt and with the grime of Beirut’s streets on their faces. Hopeless. Vulnerable. Fearful. And alone.

It was not easy to know how to respond faced with such need. Giving these kids some money that would likely find its way into someone else’s pocket was not a solution. Having a supply of small food items available to pass out that would at least reduce their immediate hunger was a little better. But best by far was launching some care programs through Kids Alive International that kept some of these kids off the streets and instead gave them the opportunity to receive an education.

But the problem of street children in…

What good is Life without Love, Liberty & Laughter?

Pete in the Florida Keys

Thoughts on Walking in the Word